Megan, Iman and Bronte made it on TV, radio and online!

Here are the girls’ recollections of the experience…

Recently Iman, Bronte and I have been doing filming about Alzheimers disease; it has been really interesting but we have to remember the real reason we even started.

I wrote an article about the effects of Alzheimers and my article was noticed by the BBC and they decided to do filming on it as they found the effects on children intriguing.

I initially wrote the article as my grandad was diagnosed when I was very young: I have grown to deal with Alzheimers first hand. However, one of my friends was heartbroken after her grandad was diagnosed. She only had me who had been through that and I realised that dementia, especially Alzheimers didn’t have enough interest. When I wrote the article, I found out that my best friend, Iman had a Nan with Alzheimers.

My main ambition that I focused on was raising awareness. I think that I have done all I can –with the help of my friends- to reach my intention.

I thoroughly enjoyed going through this experience with my best friends: it has made it much more exciting and fun.

On our trip down memory lane we have been through a roller coaster of emotions: we have all been shocked, interested and in some parts a bit down in the dumps. Furthermore, this has been a once in a life time opportunity that all three of us will never get this experience back.

All of us really appreciate what our BBC school report teacher –Miss Hitchens- she has been a crucial part of our hard work. She has organised interviews with people from the Alzheimers Society allowed us to learn about the disease from people like Hayley Misell from the Trafford branch. Without her we couldn’t have raised awareness. Thank you Miss Hitchens!

During the past few weeks Megan, Iman and I have been taking time out of lessons to film our Alzheimer’s  video. We have all been very luckily to have Hayley Misell from the Alzheimer’s society, the BBC crew- Gilly and Rob and Alzheimer’s research UK- Dr Lizzle Burns.

We have all been so busy with all the things going on such as: people coming in, going to Iman’s house to film some of our video, we had to find different locations to video it in and lastly we had to not make any mistakes while we were talking on camera.

Megan and Iman have both got family members who suffer from Alzheimer’s. Iman’s gran does and Megan’s granddad  they both struggle to visit them because when they ask what they did yesterday their grandparents can’t remember.

Our best memoirs of filming this video was when Megan, Iman and I were trying to speak on video and Mr beeley was shouting really loudly at his Rugby team and the camera picking up the shouting noise

Personally I am so luckily to not have anyone that suffers from Alzheimer’s in my family. If I ever do I will know how to deal with it and how to help them go through the pain.

I would just like to thank all of our helpers who have helped us put this film together if they didn’t help us we couldn’t of done it without them. I would also like to thank Megan because she was the one who wrote the article and she chose me and Iman to help her. Most of all I would like to thank Miss Hitchens for helping us and she is always congratulating us on what we have done.

When Megan, Bronte and I were so lucky enough to get the opportunity to be filmed. We all have been so fortunate and have enjoyed every step off the way. Personally me and Megan have enjoyed finding out more facts about the disease, mainly for helping with our grandparents, on the other hand Bronte wanted to find out more information and facts purely for research, since she luckily has no one in her family who has experienced this first hand.

We have all really enjoyed meeting all these people who are experts on Alzheimers and it was really wonderful listening to someone who has an idea of what Megan and I are going through.

Before this amazing journey I had no idea that my best friend was going through the same pain and also before the report I didn’t know that much about this life changing disease.

Everyone who is involved in this immense expedition has helped so much and it has been really appreciated by us.

All of us are so unbelievably excited for the video to be on so many channels and radios including: Newsbeat, Newsround, BBC news channel, 5 live, wellington website.

All of us just want to say thank you so much to everyone involved it has helped in our families so much mentally and physically. 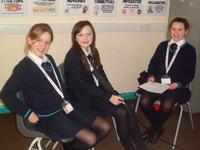