Well, I’m afraid that this will have to be the shortest bulletin on record as we are rushing around trying to get things ready for the Christmas Fair on Sunday.  Due to the efforts of Mrs Tasker and the team, we now have a record number of stalls and the best Santa’s Grotto this side of the North Pole.  It’s going to be a fabulous morning so, please, come along with as many friends and family members as you can muster.  Doors open at 10 and we will ‘wrap’ things up at 1 o’clock.  I stated last Friday that I was feeling far from Chrismassy but that things might change by today; that is indeed the case as we finalise preparations for the fair.  ‘Tis the season to be jolly! 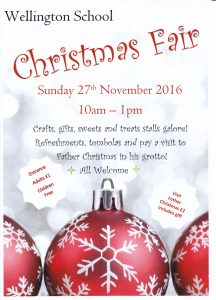 I mentioned last week that we were on the verge of switching to our new website; well, we weren’t quite as ‘on the verge’ as I thought unfortunately but I have every confidence the ‘switch will be flicked’ early next week.  As requested, your input into what you would find useful on the website would be gratefully received.

Anyway, here’s a brief look back at just some of the events of the last 5 days:

Mrs Copeland write; “Following the annual sponsored walk in February 2016, where our students raised an unbelievable £41,225 for the Teenage Cancer Trust –  the most money we’ve ever raised for a single charity in the nineteen years of the sponsored walk – Wellington students were delighted to be asked to take part in the 2017 Runway on the Runway event. This was an added reward to the already tireless involvement of the Teenage Cancer Trust who have been delivering their education programme to our students. 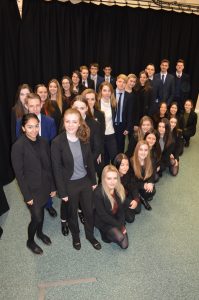 Once the prospect of further charitable involvement (and the chance of 15 minutes of fame) was announced, there was a flurry of volunteers to be models, fundraisers, make-up artists and hair stylists. Following a rigorous series of impressive auditions and interviews, the Wellington Team was established.

Immediately, the fundraising team were inspired to produce an action plan and start the process of raising funds as swiftly as possible. In fact, the day after the presentation, pupils began sending out applications for permits to collect money in the local area! Further, they persuasively implored local supermarkets to allow them to bag-pack; set-up stalls for our Christmas Fair to raise money for the charity as well as organising the hotly-anticipated Christmas Jumper Day!

It is important to note that none of our models have any experience of dance or drama yet they do have one thing in common; the Wellington spirit to be caring citizens dedicated to helping others. Indeed, the students involved have thrown themselves in to the project because they are fully aware of the importance of this fantastic charity.

We are extremely proud of the entire team and are really looking forward to the big night!” 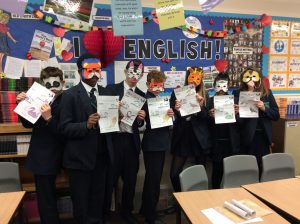 “10.8 English are ‘flying’ in their study of Macbeth,” writes Miss Hitchens, “although not on broomsticks I hasten to add. So much so, the class had time to explore animal imagery further by creating a display of their learning. To make their understanding of Shakespeare’s animal imagery and symbolism more vivid, we injected some fun into the activity with the students exploring the animalistic tendencies of a number of creatures…complete with a range of striking masks! While Macbeth is certainly described as a ‘lion’ in Act 1, I had to finally give up hope on finding a ‘giraffe’ metaphor! Well done 10.8!”
Maths

Mrs Mackay awards Gentian Bogujevci in Year 11. “Gentian is working with real commitment and understanding at the moment and as a result is achieving high levels of attainment overall.  He meets each challenge with sincerity and determination and is keen to do extension tasks to further his knowledge and understanding. Well done Gentian, keep working hard!”

Mr Fellowes awards Lillia Eaton in Year 7. He comments that “Lillia brought in a book of the Maths work she had completed over the summer holidays, which was brilliant. It included methods to work things out and rhymes to remember specific times tables. I was very impressed with Lillia’s preparation for Maths at Wellington School.”

Mrs Heaton awards Bailey Nunns also in Year 7. “Bailey has shown a great level of enthusiasm and hard work this week in Mathematics. He has enjoyed practising his skills in number and often asked for extension work. I have been very impressed, well done Bailey!”

Mrs Williams reports how 9A French have had a unique opportunity this week for an ‘authentic’ cultural experience. They are writing pen friend letters to students in a link school in Lille courtesy of Héloise, our French assistant.

Also in MFL, the Year 10 Language Leaders are getting ready with their Christmas activities, guided by Mrs Whitham.

Year 11 have done themselves proud in the speaking tests; there have been some outstanding individual performances. Mrs Williams’ classroom has been a hive of activity during morning registration times; in fact, there have been so many Year 11 students attending extra support that extra seats and extra help from Year 12 language stars have been drafted in! Your MFL teachers are very proud.

“We travelled to Brooklands Hockey Club to play Sale Grammar again and with fading light the boys did themselves proud! They were super in attack and strong in defence, leading to a 2-0 win. Tom Braithwaite was deservedly awarded man of the match. Well done lads!”  Report from Miss Richards.

Mr Higginson provides this week’s match report; “The team travelled away to North Cestrian for their second game. The first half was a close affair with both teams struggling to capitalise on opportunities but Wellington went into the break 16-10 ahead. Following an inspired team talk from Mr Gubbins, Wellington started the 2nd half with a bang! The boys completely dominated the 2nd half putting together some fantastic passages of play in both attack and defence. The game finished 46-18 to Wellington. All players contributed to a great team performance but the MoM award goes to Martin Griffin for a brilliant attacking display.”

“After last week’s impressive result for the team we rolled onto St. Ambrose. They again had an all Year 9 team where, as stated last time, we have a majority of Year 8’s. This was our worst display yet with turnovers and score percentage but the team kept persevering and we led 19 – 11 at half time. Our defence has been very strong and again that proved the difference as we rolled out 33-14 winners. This is a great result and after two wins in a Year 9 league, the team are more than holding their own.”

Mr Morgan reports on a convincing 37 – 6 win over North Cestrian this week; “The team were a little wounded after last week’s narrow 23-20 loss to BTH, so were taking no prisoners in this impressive victory.  Zak Fenton was a man possessed scoring 12 of the 37 points, his power when driving to the basket was simply too much for the Cestrian team.  I asked for a more composed display in defence this week and the team responded with a solid ‘zone’ allowing very little space for the opposition.  Ollie Brockett continued his good work from last week, sharp in defence and some nice link up play further up the court.  The Year 10’s continue to develop with Christos Blazos being very creative in attack, George Thompson and Aaron Ingham got their first starts of the season and adapted well.  After a few more practices under their belt the team are starting to gel and the future is looking good for the team.”

“Wednesday saw us take on Altrincham Grammar in the 4th round of the English Schools Cup. We were venturing into unchartered waters getting this far and the team were nervous but eager to get out there. The game was really tight throughout with AGSB having the better of the first half and us having the better of the second half. Neither team scored when they were on top despite both teams creating clear chances. Louis Wright, Jordan Ruchat and Ethan Pearce were rocks at the back against their strongest player with George Stelfox, James Buckley and Tom Carr working tirelessly to make things happen. 0-0 after extra time and we were on top – we came out with same attitude and were dominating, but it only takes one lucky bounce or shot – unfortunately they got it with a scooped shot that looped over goalkeeper Henry Howarth. We rallied and had two opportunities but didn’t take them. They scored again with the last kick of the game due to us pushing for that equaliser to finish 2-0. It was “nip and tuck” between both teams and a very even contest on a boggy pitch. Man of the match was Henry Howarth with some vital stops at key points when we needed it – a great keeper with a great attitude.”

All good things must come to an end; I know how devastated the boys were but they really have done themselves and the school proud.  Revenge is sweet, as they say, and hopefully we’ll get the chance for some of that in the Trafford Cup competition later in the season.

Mr Morgan reports that the sixth form team were deserved 2-1 winners over Sale Grammar school on Wednesday.  “Lochlan Hall made an impressive first start in goal allowing Jake Howarth to add some height to the defence.  Our success this year has largely been due to a strong defensive unit, with Sam Owens, Dan Mullings and Sam Lloyd leading from the back.  Sam Corbishley, Tom Swindell and Scott Milner came to terms with a strong Sale Grammar midfield, this allowed Wellington to retain possession and manage the game.   Wellington’s first goal came from a set piece, excellent delivery from Jack Davenport and a towering header from right back Sam Lloyd, he is not known for his scoring prowess so was justified in making the most of his celebration.  The second goal was made by a superb 20 yard pass from Sam Corbishley to Josh Wilkinson who managed to carefully lob it over the Sale keeper, I’m not sure if it would have gone straight in, but Jack Davenport made the most of it and stole the goal from Josh.  Sale scored a scrambled consolation in the last few minutes. Overall, a great performance from the team and hopefully we can take this into the now rearranged Greater Manchester Cup match against Parrs Wood. Man of the match went to Josh Wilkinson.”

And finally, some sports news from outside school; Mr Manifould updates us on Year 10 student Imogen O’Mahoney who continues to represent GB in ice skating. She is in fact competing in Belgium this weekend.  We wish her the very best of luck and eagerly await news of her performance next week.

Just a reminder, if it had escaped you or, God forbid, been deliberately kept from you, that mock exams begin for Year 11 on Thursday (1st December) and for 6th Form a week on Monday (5th December).  Mocks are incredibly important as a confidence boost potentially but crucially as a means of diagnosing where students are at currently.  Please encourage your child(ren) to engage with the revision process and establish some good habits ahead of second mocks in March and the real thing next summer.  Good luck to all those concerned.

I really will have to bring things to an abrupt halt at this point as I’m being called to help out as Mrs Tasker’s Little Helper.  I hope to see lots of you at the Christmas Fair on Sunday, assuming that you have spent up on Black Friday.

Have a great weekend