Miss Ryan reports on this year’s ‘Ready, Steady, Cook’ event which took place this week.
“On Wednesday 9th November, the whole of Year 8 watched a ‘Ready, Steady, Cook’ food roadshow. TheSchool’s caterers, Chartwells, operated the event led by chef James who was assisted by the our catering manager, Leon.

The Green Peppers team were Mr Pinkerton, Max Morgan and Lucy Potts and they were competing against the Red Tomatoes of Mr Tomlinson, Ethan Griffin and Nicole Page. 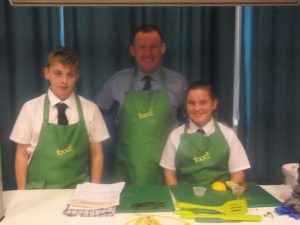 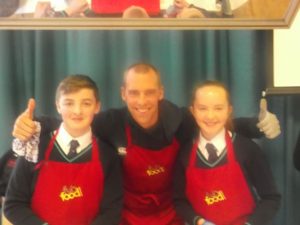 Chef James started the event by finding out how much the Wellington pupils knew about the new Eat Well Guide. The pupils were very enthusiastic and able to answer all Chef’s questions, showing how knowledgeable Year 8 are when it comes to healthy eating.   Next came the cooking competition. The teams had 15 minutes to prepare and cook their given dishes. The Greens made Lentil and Cauliflower Curry accompanied with a cous cous salad and the Reds produced Thai Fishcakes and Spicy Noodles. Both dishes looked and smelt delicious.  Groups of pupils were then chosen as the ‘Tasting Panel’. This involved tasting both dishes and then relating their preferences back to the audience. Finally, the audience held up their voting cards – showing the colour of the team they thought should win.

And the winners were … the Green Peppers!

The event was very exciting and all the Year 8 pupils agreed that it was a fantastic way to learn about food.  Thanks to James and Leon for all their hard work and to Mr Tomlinson and Mr Pinkerton for being fantastic team captains.”

A ‘lads and dads’ cooking evening has been proposed for next term so watch this space; I’ll have to buy a new apron!

ore from Mrs Ryan with this Food Technology update:

“As we reach the end of the first technology rotation it is pleasing to report that the majority of pupils have shown great enthusiasm for the subject and are keen to learn new skills.

I have been particularly impressed by Year 7, especially twins Jack and Ben Lewis who have been inspired to do more cooking at home. It was lovely to receive some feedback from Mrs Lewis who enjoyed the chicken stir fry and has invested in a new wok to encourage the boys to continue developing their new cooking skills. 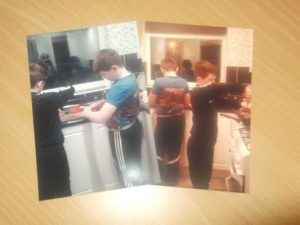 Mrs Lewis also enclosed some photographs of the boys hard at work. Thanks Mrs Lewis – it’s always great to hear about which recipes have been a success.

Another success of this rotation has been the homework submitted. Some of the tasks on the homework menu involved cooking at home and also doing food experiments. Well done to Ellie Quantrill and Alex Chappell who chose the homework task of producing a Mediterranean dish and taking a photo. Not only did the girls make a beautiful Cheesecake (Greek dish) but they decided to bring a slice in for me so I could fully assess their work. It was delicious girls. 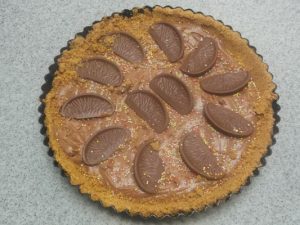 Well done to all pupils in Years 7 – 9 who have just completed Food Technology, it’s been a great 10 weeks.”

Of course, all our foodies have been spoilt by the use of the brand new facilities in Food Tech and I hope they’ve enjoyed the rotation and realise how lucky they are.