We were lucky enough to inteview Andy Sheridan, an actor who attended Wellington School and who has recently been in the play Blindsided as well as Rachel Burden, co-presenter of BBC Radio 5 Breakfast Show.

Inside Blindsided: An Interview with Andy Sheridan

On the 27th March, 2014, we were lucky enough for actor and playwright Andy Sheridan to come to Wellington School so we could interview him about his career and the play he was recently in, Blindsided.

Andy Sheridan had not been to Wellington School for twenty-two years. He told us that the school had lots more people than when he went, as currently there are around one-thousand, three-hundred pupils at Wellington. However, when he was there, there were only seven to eight hundred pupils so now it feels much busier. When he went to the school, Wellington was split into boys (Moss) and girls (Vale) until he was in third year, or year 9 as we know it. He also knew some of the assistant heads, like Miss Copeland and Mr Shaw, as they were already teachers at the school. During his time at Wellington, the boys’ and girls’ schools combined; the classes were not mixed and the separate schools weren’t allowed to speak to each other, but they secretly met on the field to talk!

He also told us that his favourite subject was English as he has a love for reading and creative writing. Also, he said that if he hadn’t decided to be an actor, he would have been a teacher. He also feels that he thinks that acting and teaching are very similar because if you’re teaching a class on a Monday morning, you have to put on an act , a happy face and follow what you have prepared (like a script).

He also talked to us about his latest play called Blindsided. It’s set in Stockport in the 1960s where a man (John Connelly) falls in love with a girl (Cathy Hayer) but her mother disapproves (Susan Heyer).  He said working with Hayley from Coronation Street was very surreal. He also said that he had worked with her once before and that when he worked with her in Blindsided ‘It was like he had known her all his life.’

Excitingly, Andy hopes to be joining Coronation Street next year as that is solid pay and his girlfriend is having a baby and they are buying a new home.

He advised that if you want to be an actor/ actress you should probably go to a drama club both inside and out of school like the Royal Exchange youth theatre. Andy also acknowledged that you should consider other options before seriously thinking about becoming an actor/ actress as it is not a solid job and could be a bit risky. However it’s brilliant if it works out.

By, Jacob, Tom, Sam and Sharif

Today we got the chance to interview news reporter Rachel Burden.

For those of you who may not know who she is, Rachel is a news reporter who does a daily breakfast show called ‘BBC Radio 5 Live’. She’s been working there for about ten years.

Rachel said that she started her career whilst she was studying by working on the university radio. She has always loved the radio which has stemmed from when she was very little as her father worked in radio. After university, she then did a journalism course at Cardiff; she then had to think of a career so Rachel thought logically. She liked the radio and she liked lots of gossip and so radio was the perfect choice for her. She enjoys “the challenge of digging out stories” and “getting to the heart of what’s going on.”

She started the interview by telling us that she had “a natural curiosity for anything and everything.” Firstly, we asked what she liked most about her job as a journalist. She said that she likes being a journalist because there are no restrictions and there is the “freedom to explore things that you’re interested in”

She explained that the most interesting story that she has ever covered, was when she visited South Africa just after Nelson Mandela died. Rachel found it interesting that they were celebrating his death instead of mourning. Rachel said it was a “moment in history …  the end of an era.”

The most famous person that she has ever interviewed was Bradley Cooper! She said that he was very calm and that he was used to talking to the press and doing interviews. Some of the most difficult interviews she has ever done is with politicians who sometimes they can be quite “awkward!”

When we asked her about her day-to-day life at the BBC, she replied that she gets up at 3:30am! She then arrives at work at 4:30 in the morning and then she has to prepare and get ready for her radio show. She talks with her production team and finally her show starts at 6:00am. The show lasts three hours when she can officially go home but sometimes, she     decides to stay for meetings or go through e-mails and paperwork. When she does finally get home, she starts her new job looking after her small children.

This morning on Rachel’s show, she announced that she was visiting Wellington School. She mentioned the Alzheimer’s report that was produced by Megan, Iman and Bronte. We then asked what she thought about it. Rachel was very complimentary and said that she thought the report was “brilliant … a lovely  audio … excellent!” Rachel thought the girls spoke “openly and honestly” and she thought it was lovely that it was coming from someone else’s perspective rather than a news reporter’s because it comes from the heart.

Most people would like to know if Rachel gets nervous on set. Who wouldn’t because there is an audience of thousands listening to you! However, she said she is used to it and doesn’t get nervous anymore. She said it’s much easier not to get nervous on radio because no one can see her.

In conclusion, our visit from Rachel Burden was fantastic! It was delightful that she took time out of her busy schedule just to come and speak to us.

By, Charlotte, Ellie, Katie and Andrew 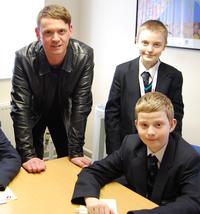